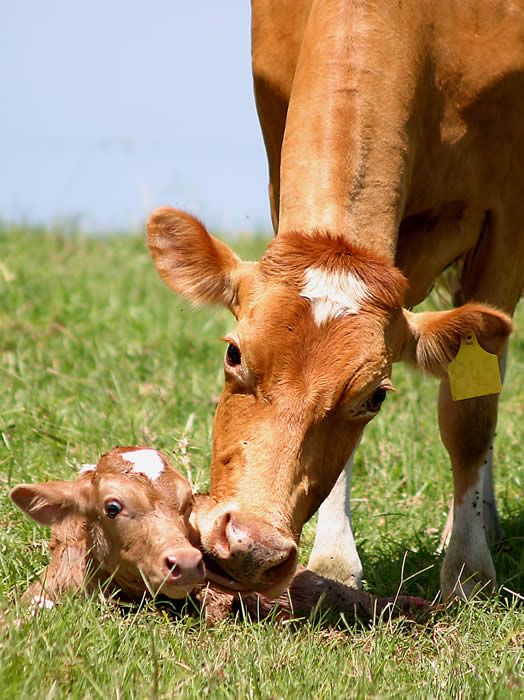 Guernsey cattle were developed on the Island of Guernsey which is one of the Channel Islands off the coast of France. The breed was developed about 1,000 years ago by monks who moved to the island and brought with them the best bloodlines of French cattle, Normandy Brindles, also known as Alderneys and the Froment du Leon breed from Brittany. Guernsey cattle also inhabit the Islands of Alderney, Herm and Sark. In 1819 a law was passed on the islands prohibiting the importation of live cattle to the islands for any purpose. The breed has constantly been improved and maintained pure since that time.Guernseys are generally a beautiful golden fawn colour with white markings although variations from a brownish red and white to a very light fawn and white are common. They are a medium size dairy cow with most mature cows weighing 550 kgs to 700 kgs.

Guernseys are known for their quiet temperament, calving ease, early maturity, and efficiency in converting forage to milk solids. The breed is adaptable to extreme climate conditions as well as various housing systems. Guernsey milk is characteristically high in milk solids and has a distinctive golden color, resulting from its unusually high content of Beta Carotene.

She is docile and friendly. She can be grey, brown, tan or almost white in color. Her milk is full of protein is great for making cheese!

Softer faun brown and white markings cover her face and body. Her milk is golden in color and is high in beta carotene and butterfat.

She is generally smaller than Holsteins and is light to medium brown in color. Her milk is generally higher in butterfat (yum.)

She is a very versatile cow and thought to be the first cow breed in America.